Emmy-winning actor and comedian Louie Anderson has been diagnosed with a form of non-Hodgkins lymphoma and is undergoing treatment at a Las Vegas hospital, according to his publicist.

Anderson, 68, is said by longtime spokesperson Glenn Schwartz to be “resting comfortably” at the hospital as he is being treated for diffuse large B cell lymphoma. According to the Lymphoma Research Foundation, this form of blood cancer attacks certain types of white blood cells that make antibodies to fight infections and is “potentially curable.”

Anderson has earned three Emmy nominations with a win in 2016 for his performance opposite Zach Galifianakis in the FX show “Baskets” as Christine Baskets, the mother of two twin sons played by Galifianakis, one of whom gets a job at a small-time rodeo in Bakersfield after failing to make it as a clown. Anderson also won two Daytime Emmys for his performance in the 90s animated series “Life With Louie,” which was based on his childhood in the midwest. 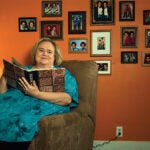 Anderson also recently appeared in Eddie Murphy’s “Coming 2 America,” reprising his role as the goofy fast food worker Maurice from the original “Coming to America” in 1988. He has also been known for his regular appearances on late night television dating back to his debut on “The Tonight Show” in 1984 and most recently on “Conan” this past March, where he said he had lost 40 pounds since the COVID-19 pandemic began.